How Terrorists Move Funds Through the Global Financial System

Terrorist organizations, such as Al Qaeda, Hamas, Hezbollah and FARC, state sponsors of terrorism, such as Iran, and criminal organizations, such as Mexican drug cartels, have had many years to perfect their fundraising infrastructure and exploit weaknesses in the safeguards established by governments and the global financial sector.

In addition to funding historically received through charitable fronts and donations from state sponsors of terrorism such as Iran and Syria, many terrorist and criminal organizations raise money through a variety of criminal enterprises, including narcotics trafficking, credit card scams, and smuggling. For example, Mohammad Hammoud and five other individuals were convicted in 2003 for organizing a cigarette smuggling ring in North Carolina for Hezbollah’s benefit.  Investigators estimate that the smugglers collected approximately $2 million in profits from their activities.

The United States and other nations have developed legal and regulatory systems aimed at detecting, blocking, and freezing illegal funds transfer activities, and (especially post-9/11) tools to identify and map terrorist and other criminal networks. But these systems have limits, and terrorists, money launderers, and rogue states constantly attempt to exploit vulnerabilities and systemic flaws in the financial system. For example, since 1986, the U.S. has maintained an anti-money laundering regime requiring banks to report banking transactions that bankers find “suspicious” as well as those indicative of criminal conduct. However, many experts  complain that information gathered through such channels is not used effectively, at times focusing too narrowly on a particular incident, or only generating anecdotal evidence to indicate patterns-and-trends, rather than deeper data mining. And while an entire industry comprised of expensive computer software and training seminars has developed to combat money laundering that has arguably improved risk detection and intelligence gathering, anti-money laundering and terrorism financing regulations are only as effective as the commitment financial institutions have to implementing them. The past decade clearly demonstrates that the international financial community remains a key point of vulnerability because some banks are not actively trying to prevent illicit conduct and others are actively profiting from it.

As noted terrorism financing expert Dr. Matthew Levitt observed when he testified before the U.S. Congress in 2010, a key vulnerability of large terrorist groups such as Hamas and Hezbollah is their “need for a large flow of external funds, necessitated by the local population’s inability to finance all of the infrastructure needed to provide essential services.” Identifying and exploiting terrorists’ vulnerabilities in this respect requires understanding the different means and mechanisms that such groups employ to maintain steady cash flow.

In the Islamic world “zakat” (religious tithing) is considered a religious obligation. Islamist terrorist organizations often raise funds through charitable organizations by exploiting the tenet of zakat through fundraising apparatuses that provide a ready source of income generated from religious or ethnic communities with ties to the Middle East. Although Islamic charities serve many legitimate purposes, in many places a lack of transparency, oversight, and financial controls fosters an environment allowing terrorist groups to divert funds raised in the United States, Europe and elsewhere and use them for illicit purposes.

In fact, the Financial Action Task Force on Money Laundering’s 2002-2003 Report confirmed that some Islamist charitable organizations were established solely to earn funds for terrorist organizations. For example, the Holy Land Foundation for Relief and Development in Texas was convicted in 2008 of raising millions of dollars in the United States for Hamas. Similarly, the Al Aqsa Foundation in Germany was successfully prosecuted for funding Hamas. Likewise, the “Martyrs’ Foundation” in Lebanon, headed by Mohammad Hasan Rahimiyan, is allegedly controlled by Hezbollah.

These concerns linger today, both at national and local levels. For example, the New York State Legislature continues to consider a bill aimed at prohibiting funding of terrorist activities through donations to not-for-profit organizations. The United Nations Counter-Terrorism Security Committee also continues to explore ways of addressing threat finance risks to the charitable and not-for-profit sectors.  Donations to purported charitable organizations have also been cited as fueling the continuing violent sectarian conflict in Syria, with millions of dollars from Gulf Charities being traced to Salafi militants waging a bitter civil war in that country.

According to the U.S. State Department, the Islamic Republic of Iran remains the most active state sponsor of terrorism. Through its Islamic Revolutionary Guard Corps (IRGC) and its Ministry of Intelligence and Security (MOIS), Iran is directly involved in planning and supporting terrorist acts. Iran also continues to exhort a variety of groups, especially Palestinian terrorist groups like Palestinian Islamic Jihad (PIJ) and Hamas, to employ terrorism in pursuit of their goals. Iran’s Supreme Leader Ali Khamenei and former President Mahmoud Ahmadinejad have repeatedly praised Palestinian terrorist operations. Iran also provides Hezbollah and Palestinian terrorist groups with extensive funding, training, and weapons. Iranian control over Hezbollah is particularly direct and is exercised through various individuals and institutions, primarily through senior Iranian clerics and Iran’s MOIS, IRGC and elite Qods Force.

Syria has also been designated by the United States as a state sponsor of terrorism. The Syrian government continues to provide political and material support to Hezbollah and political support to Palestinian terrorist groups, including PIJ and the Popular Front for the Liberation of Palestine (PLFP). In fact, the Popular Front for the Liberation of Palestine-General Command (PFLP-GC) and PIJ base their external leadership in Damascus.

In recent years, Iranian efforts to use the global banking system to circumvent U.S., U.N. and other sanctions regimes reached their possible zenith in the wake of multi-billion dollar scandals involving many of the world’s most prominent banks that aided Iran’s efforts to avoid detection of prohibited transactions. These banks included (but were not limited to) Lloyds TSB, Credit Suisse, Bank of Tokyo Mitsubishi, Standard Chartered Bank, and ING Bank. Incredibly, these banks did not simply look the other way, or stumble in detecting illegal transactions. Instead, they frequently proposed, developed protocols, and actively coached Iran and Iranian bankers in ways to “strip” information from funds transfers. While the banks have collectively paid hundreds of millions of dollars in fines, and entered into Deferred Prosecution Agreements with the U.S. Department of Justice, to date no bank has been criminally prosecuted, leading many counter-terrorism professionals (including Professor Jimmy Gurulé, former U.S. Undersecretary for Terrorism and Financial Intelligence) to raise the troubling question, “are banks too big to prosecute?” Indeed, concerns about whether federal regulators can handle this job alone have led some states to independently pursue measures, including enacting statutes requiring state pension funds to divest themselves of companies’ stocks where those companies have discernible ties to State Sponsors of Terrorism.

Terrorist and criminal actors vary their methods, based on differences in their structure, role, and degree of openness. For example, Al Qaeda, largely a clandestine network, frequently uses “Hawala” channels (though it also raises funds through mosques, sympathetic clerics, and charitable organizations). Hawala is an alternative or parallel remittance system (literally translated as “transfer”) often associated with informal money exchange systems operating outside of formal financial sectors. It is used primarily to send money home to the Middle East or South Asia from abroad without physically transporting currency, thereby making it difficult for investigators and regulators to track the money.

In its simplest form, Hawala has four parties: (1) a customer who wants to send money; (2) a local intermediary (hawaladar) with a counter-part in the country or region where the customer wants to send the money; (3) a hawaladar in the receiving country or region who will provide the actual money to the recipient; and (4) the recipient.  Thus, Hawala acts as an informal transnational credit system without the need to physically transfer currency from place to place. Like other “informal funds transfer systems” Hawala originated as a means of developing efficient and safer systems for trade financing, given dangers in traveling with gold or other hard currencies. The Hawala system, though used elsewhere, is principally and historically associated with South Asia and the Middle East, where expatriate communities who migrated to Europe, the Persian Gulf region, or North America, use Hawala to send remittances to relatives back home.

Although Hawala is used for legitimate funds transfers, its anonymity and minimal documentation have also made it vulnerable to abuse by individuals and groups transferring funds to finance illegal activities. For example, a series of bomb blasts in a major Indian city in 1993 was financed through Hawala, with the subsequent investigation revealing that the funds supporting these bombings (specifically funds used to buy explosives and to pay the bombers) were handled by Hawala operators in the United Kingdom, Dubai and India.

An Ever-changing, Ever-Growing World of Risk

The admirable and hardworking efforts of law enforcement, regulators, and standards-setters are essential, but have proven insufficient to completely overcome the creativity manifested by criminals. More than ever, the civil justice system plays an important complementary role in combating terror financing. Because the issues involved are complex, and the knowledge and background needed to evaluate the risks is specialized, few law firms are as deeply involved in terror financing litigation as Osen LLC. Our Firm is selective in the cases we bring, doing so with an eye toward advancing the law in a positive direction and doing our part in the wider struggle against international terrorism. 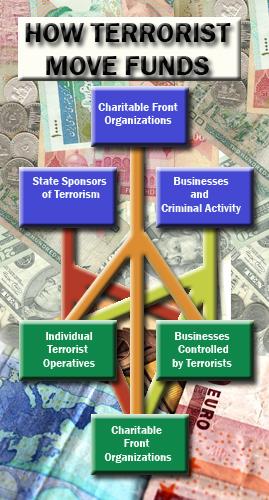 How Terrorists Move Funds Through the Global Financial System