Osen LLC (together with Turner & Associates, P.A. and Motley Rice LLC) represents more than 240 families of Americans who were victims of Iranian-supported terrorism in Iraq between 2004 and 2011 in lawsuits filed against the Islamic Republic of Iran. In fact, more than 1,000 U.S. service members were killed or injured by Hezbollah-designed and Iranian-manufactured Explosively Formed Penetrators (EFPs) and Improvised Rocket-Assisted Munitions (IRAMs).

The Complaints are brought under the Terrorism Exception of the Foreign Sovereign Immunities Act (FSIA), which is the mechanism used to sue State Sponsors of Terrorism like Iran. Federal judges have consistently awarded monetary damages to terror victims under the FSIA’s Terrorism Exception for deaths and injuries caused by, for example, the Libyan bombing of an airliner over Scotland, Iranian kidnappings, and Iranian material support to Palestinian terrorist groups.

Unlike most cases brought under the Anti-Terrorism Act (ATA), defendants in FSIA cases rarely appear in court to contest the allegations brought against them. Although the plaintiffs are still required to present evidence and prove their case to a court’s satisfaction, obtaining a judgment against a State Sponsor of Terrorism is not as difficult as enforcing and collecting on it.

On December 3-6, 2018, our legal team presented its evidence to the Court in the Karcher case that between 2003-2011, Iran’s IRGC and Lebanese Hezbollah organized, financed, trained, supported, and directed its Special Groups proxies in Iraq to attack U.S. service members. The Plaintiffs also presented evidence that identified EFPs as signature Hezbollah-designed and Iranian-manufactured weapons and explained the particularly deadly physical and psychological effects that these weapons cause.

Lastly, the Plaintiffs provided evidence and expert testimony demonstrating that Iran was responsible for the specific attacks at issue in the Karcher evidentiary hearing. Over the course of three days, the court heard testimony from a variety of experts and fact witnesses, including an internationally recognized terrorism expert; decorated, retired high-ranking military officers who served in Iraq; an explosives expert; and select, renowned medical experts intimately familiar with EFPs and the signature injuries that they cause. In addition, certain injured Plaintiffs and a relative of a soldier killed in one of the attacks testified about the long-lasting and far-reaching effects of the attacks on their lives.

On August 26, 2019, the District Court issued its Memorandum Opinion in which it found Iran responsible for the seven Bellwether attacks that had been presented during the evidentiary hearing. The Court stated that it had reached that determination based on a “substantial amount of evidence submitted before and during that trial.” Addressing the six bellwether attacks that Plaintiffs alleged were perpetrated with EFPs facilitated by Iran, the Court “concluded that Iran, the IRGC-QF and/or Hezbollah, furnished EFPs or the components thereof, facilitated training of Shi’a militia, and supported the militia’s effective deployment of the weapon.” The Court also found Iran liable for the seventh Bellwether attack, the January 20, 2007, Hezbollah-directed attack in Karbala that claimed the lives of five U.S. servicemen.

In September 2019, the District Court appointed a Special Master to prepare reports and recommendations (R&Rs) for the damages that should be awarded to the Plaintiffs physically injured in the Bellwether attacks. The Special Master has not yet submitted the R&Rs to the Court.

In January 2021, the District Court tasked the Special Master with preparing R&Rs for the damages that should be awarded to the Plaintiffs physically injured in the 73 attacks.

The United States Victims of State Sponsored Terrorism Fund (Fund) was created by legislation Congress passed in 2015 to provide compensation to a specific group of international terrorism victims harmed by state sponsored terrorism. The Fund is designed to compensate victims of international state sponsored terrorism who have secured final judgments in a United States district court against a State Sponsor of Terrorism. Once a claimant obtains a final judgment, they must file a claim within 90 days of obtaining that final judgment.

Because the Fund has limited resources and there are many terrorism victims harmed by state sponsored terrorism who have (or will obtain) final judgments against them, it is unlikely that any claimant will receive the full amount of their judgments, but the Fund offers the possibility of some compensation and is often worth pursuing. 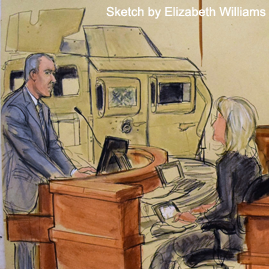 “US Veteran, Father of Veteran: Death of Soleimani Makes World Safer”
“‘I Lost My Legs’: Wounded in Iraq, He Sued Iran”
“Why Trump must lead by example on Iran”