The Lebanon-based Shahid Foundation, a U.S.-designated terrorist organization, is funded by Iran. It has operated in the Palestinian Territories in concert with the Gaza-based Al-Ansar Society, which was designated an Illegal Association by Israel on October 24, 2003. According to the Palestinian daily newspaper Al-Hayat Al-Jadida (October 23, 2001) (English translation here), Al-Ansar distributed martyr payments on Iran’s behalf through its Arab Bank accounts. Al-Hayat Al-Jadida also published announcements on May 15 and 16, 2001 (English translations here) that were signed by Al-Ansar, inviting families of “martyrs” that resided in the Gaza Strip to arrive at the Society’s offices in Gaza to receive their payments. Families of West Bank martyrs were asked to send copies of official documents, which proved their status as martyrs’ families, to a mail box in Gaza, so that they could receive their transfers. The documents the martyrs’ families from the West Bank had to provide included the martyr’s identification card, his picture (if they had it), the beneficiary’s identification card, a copy of the death certificate, and copies of the birth certificates of the martyr’s sons (if they had them).

An announcement that appeared in Al-Hayat Al-Jadida on July 1, 2001 appearing in Al-Ansar’s name suggests that Arab Bank’s branches played a central role in transferring money on Iran’s behalf through the Shahid Foundation and Al-Ansar Society. The announcement called upon the residents of the southern Gaza Strip to come and collect their payments from Al-Ansar’s offices in Gaza; residents of the West Bank, as well as the northern Gaza Strip, were asked to go to the Arab Bank branch in which their account was managed in order to collect their funds.

Al-Ansar was targeted by Israeli counter-terrorism measures when Israeli security forces raided Arab Bank’s branches in Ramallah in 2004. In fact, on its website, Al-Ansar publicly denounced the raid, which the Israeli Ministry of Foreign Affairs justified based in part on the seizure of Al-Ansar’s funds at Arab Bank. 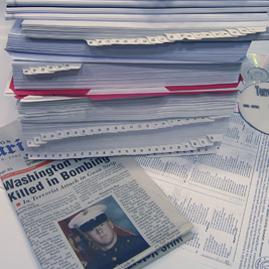