Sheikh Ahmed Yassin, the founder of Hamas, remained the group’s spiritual leader from its inception in 1987 until his death on March 22, 2004.

When the First Intifada started in 1987, Yassin formed Hamas in order to join the uprising and challenge the PLO's exclusive claim to leadership over the Palestinian people. Hamas's avowed goal then and now is the elimination of Israel through armed struggle and its replacement with an Islamic state governed by Sharia law.

"For those who wish to perform a Jihadi act from outside of Palestine, perhaps there will be a need for that in the future, as I have said earlier.

For those who wish to donate money in order to help the people that were harmed during this war, here is the account number: The Arab Bank – Gaza, account number 36444, the Sheikh Ahmed Yassin. As for the support in the media, this conversation is part of it, alongside participating in open TV programs for holy fighters against the hostile Jews, writing articles, and arranging parades and seminars and other means."

Yassin was arrested by Israel in 1989, after ordering Hamas operatives to kidnap Israeli soldiers inside Israel, murder them and exchange their bodies for Hamas prisoners in Israeli jails. Yassin was tried in Israel and received two life sentences for his involvement in the abduction and murder of Ilan Sa'adon and Avi Sasportas, but was released from prison in October 1997, at Jordan's King Hussein's request, in return for the release of Israeli agents who had unsuccessfully tried to kill Khalid Mishal in Amman. Yassin was greeted in Gaza as a hero. 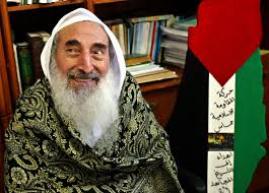