OSEN LLC has successfully represented several branches of the Wertheim family for the past 20 years in the Wertheim family’s 70-year pursuit of justice against the German Government and the well-known German retailer formerly known as KarstadtQuelle AG. Beginning in 2001, the case became an international cause célèbre and the subject of high level diplomatic exchanges and worldwide media attention, but its history is rooted in the 19th century and the birth of modern day retailing embodied by the emergence of department stores.

In 1875 Abraham and Ida Wertheim opened a small retail store in Eastern Germany. In the ensuing years that store grew into a department store empire that, by the early 1930s, had become a central part of the social fabric of Berlin and one of the first name brands in all of Germany. Throughout the first three decades of the twentieth century, “Wertheim” was a name synonymous with style and quality, and the family-owned department store chain grew into not only a preeminent retailer but also one of the most significant real estate holding companies in Berlin.

By the early 1930s, the company was controlled by three of Abraham Wertheim’s sons, Georg, Franz, and Wilhelm. Because the Wertheim family was of Jewish lineage, it was subjected to almost immediate persecution once Hitler’s National Socialist Party came to power in January 1933. Over the ensuing six years, under direct pressure from the Nazi regime, the family shareholders of the company were forced to sell or transfer their company stock to so-called “Aryan” stockholders, including a prominent Nazi sympathizer. At least five members of the family ended up in concentration camps, and only two of them survived. Guenther Wertheim (son of Franz) was one of the family members who succeeded in escaping Nazi Germany, eventually settling in southern New Jersey with his wife and two children.

From the mid-1930s until the 1950s, the company was controlled by Arthur Lindgens, its former counsel, and his wife, the widow of Georg Wertheim (who was an “Aryan” according to Nazi racial laws). When the Cold War divided Berlin in 1945, the Wertheim company’s properties were situated in both the Soviet and American zones, but in 1949 the Soviet Union confiscated the company's land in East Germany, leaving Wertheim to struggle to re-establish itself in West Berlin exclusively.

In 1950, Guenther Wertheim and his brother Fritz, a survivor of the Theresienstadt concentration camp, filed a claim in Berlin for the return of their “aryanized” shares in the company. Lindgens traveled to New York in August 1951 where he informed the brothers that their shares were practically worthless, because the Soviets had seized most of the company’s assets two years earlier. The brothers didn't have the resources go to Germany or hire an investigator to confirm the company’s financial health. Instead, on November 7, 1951, they agreed to drop their claims in return for a one-time payment of approximately $5,100 from Lindgens and his partners.

The story might have ended there, but Osen LLC’s research in the German archives produced an important discovery. Unbeknownst to the Wertheim brothers, on August 12, 1951, while he was in New York, Lindgens agreed to merge the Wertheim company (which was far from worthless) with Hertie Vereinigte Kaufstaetten GmbH. The secret hand-written contract, executed in New York, described the anticipated combination of Hertie and Wertheim. It named Lindgens as chairman of the newly reorganized Wertheim company and guaranteed his wife, Ursula, annual payments of more than 3 times the total payment made by Lindgens to the Wertheim brothers a few months later.

Under the contract’s secret terms, Lindgens and his family would retain shares reflecting a 51% stake in the merged Wertheim company and Hertie would acquire the other 49% of Wertheim stock. But the contract didn't name the sellers or the price Hertie was prepared to pay for the shares, and the agreement was never filed with the German Commercial Registry. In the decades that followed, Hertie became one of West Germany's most successful department store chains, until in 1993 it was acquired by KarstadtQuelle AG.

The Wertheim family, on the other hand, had no choice but to move on with their lives. Guenther had settled on a small chicken farm in Elmer, N.J. but died in 1954 of heart failure. His brother Fritz continued working for several years as a cook (a skill he learned in Theresienstadt) in a nearby mental institution.

After the Berlin Wall fell in 1989, Hertie petitioned the Berlin Restitution Authority, seeking to take possession of former Wertheim company property in East Berlin, arguing that it had acquired all of the Wertheim company in 1951, including the East German assets confiscated by the Soviets. The Jewish Claims Conference (“JCC”), acting on behalf of unclaimed Jewish property, also filed a claim. The JCC maintained that it represented the interests, not of the Wertheim company, but of the former shareholders who had been persecuted as a result of their Jewish heritage. For a decade, the legal dispute in Germany ambled through the courts without any tangible results for any party.

In March 2001, Osen LLC filed suit in federal district court in Manhattan on behalf of Martin Wortham (the grandson of Guenther Wertheim) and Barbara Principe (the daughter of Guenther) against KarstadtQuelle AG for damages resulting from the alleged fraud that facilitated the transfer of Wertheim family shares to Hertie in 1951. Mrs. Principe returned to Berlin for the first time since her childhood about a year after the lawsuit was filed. After years of deadlock in the German courts, the U.S. lawsuit shed a new spotlight on the Wertheim case. Within a year of Mrs. Principe’s return to Berlin, the Berlin Restitution Authority at long last issued final judgments on three Wertheim properties in the city's former East Berlin section, concluding that KarstadtQuelle AG lacked any valid claim to the properties.

Initially, however, the German Finance Ministry filed an official objection to the Restitution Authority’s rulings. According to Joergen Brieger-Lutter, an official of the Finance Ministry, the government objected to the decisions because "the German Reich wasn't involved" directly in the confiscation of the properties. From a legal standpoint, this position was untenable, but it ensured further delay in resolving the matter.

But the Wertheim family never gave up. For several years, Osen LLC continued to pursue the family’s claim to the prime real estate in the heart of Berlin that belonged to the company before the Nazi era. Along the way, the Firm’s research generated disclosures of more than one “sweetheart deal” made by the German Government with Wertheim properties – including the unauthorized construction of the Library of the German Parliament on land belonging to the family. At the same time, KarstadtQuelle AG tried to cast the U.S. litigation as an attempt to unravel prior agreements between Germany and the United States involving slave labor claims.

With each emerging chapter in the dispute, it became clearer that the struggle to reclaim the Wertheim’s legacy was shaping into one of the largest restitution battles in German legal history, in part because the properties at the heart of the dispute sit at the symbolic center of the new Germany and at the crossroads of a previously divided Berlin. Although the long legal battle over much of Berlin's city center at times pitted the family against the German Government (which continued to claim that it was the legal successor to certain properties) and the German retail giant formerly known as KarstadtQuelle AG, Osen LLC doggedly pursued every legal, political and diplomatic avenue to achieve a just result for the Wertheim family.

The first clear signal of hope came when the German Government announced that it would withdraw all of its own claims to former Wertheim properties. Then, in March 2005, a German administrative court in Berlin upheld the prior legal rulings of the Restitution Authority. Later that year the German High Court affirmed that decision. The battle continued for two more years, but eventually, with former German Chancellor Helmut Kohl assisting in the mediation, KarstadtQuelle AG finally agreed to settle the matter.

As Mrs. Principe explained to The Wall Street Journal on the day the settlement with KarstadtQuelle AG was announced in 2007, “If it wasn’t for [Osen LLC], we wouldn’t be here today.” 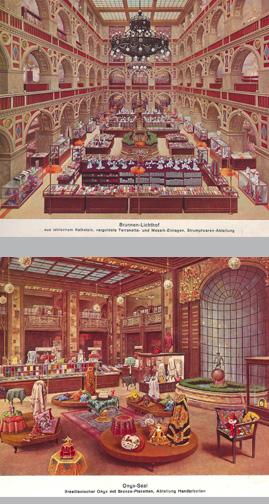