Osen LLC represents American citizens injured as a result of acts of international terrorism in cases brought under the Anti-Terrorism Act and the Foreign Sovereign Immunities Act. We currently represent the families of more than three hundred veterans who were killed or injured in Iraq between 2004 and 2011 as a result of Iranian-sponsored terrorism and are the leading firm litigating on behalf of families of fallen members of our armed forces and wounded veterans in connection with those attacks.

We have spent more than a decade investigating Iran’s role in directed terrorist attacks against our troops in the Middle East. For example, more than 1,000 U.S. servicemen and women were killed or injured by Iranian-designed and manufactured Explosively Formed Penetrators (EFPs) and Improvised Rocket-Assisted Munitions (IRAMs).

We have collected evidence concerning both Iran’s role in targeting Americans in the Middle East and its secret supply chains and money laundering activities.

We have brought the first and only lawsuit on behalf of families of fallen members of our military, wounded veterans, and American military contractors and their families, against Lebanese banks that allegedly aided and abetted Hezbollah.

We have brought the first and leading lawsuit on behalf of families of fallen members of our military, wounded veterans, and American military contractors and their families, against banks that helped Iran secretly launder hundreds of billions of dollars through the United States.

We have brought the first and leading lawsuit on behalf of families of fallen members of our armed services, wounded veterans, and American military contractors killed or injured in Iraq and their families, against Iranian state instrumentalities that helped Iran finance its terrorist operations against our troops in the Middle East. 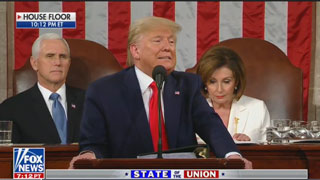 Two of President Trump’s guests at the State of the Union address Tuesday were the wife and son of Army Staff Sgt. Christopher Hake, who was killed in Iraq by a roadside bomb planted with the help of Iranian Gen. Qassem Soleimani. Dec. 9, 2018 - 6:14 - Military Times speaks with the expert witnesses, injured veterans and Gold Star families who are suing Iran in federal court for their part in killing and injuring U.S. service members. They join more than 200 plaintiffs who are represented by New Jersey-based Osen law firm and Tab Turner, an Arkansas-based attorney who were in federal court in Washington this week.