Osen LLC (together with a team of law firms across the country) represents the families of five missionaries kidnapped and murdered by the Colombian terrorist organization Fuerzas Armadas Revolucionarias de Colombia (FARC). In March 2008, the Firm filed a federal lawsuit in the Southern District of Florida against Chiquita Brands International, Inc., the worldwide banana and produce distributor headquartered in Cincinnati, Ohio. The suit alleges that Chiquita knowingly provided weapons, ammunition and funding to FARC before and during the time the missionaries were brutally abducted, held hostage and ultimately murdered. The Plaintiffs’ suit is brought under the civil provisions of the Anti-Terrorism Act, which permit American citizens or their heirs and estates to recover damages for injuries that they suffered by reason of acts of international terrorism.

Background of the Families’ Ordeal

According to the Complaint, in two separate incidents, FARC terrorists attacked and then kidnapped missionaries of the New Tribes Mission. The first three missionaries – Mark Rich, Dave Mankins and Rick Tenenoff – were abducted on January 31, 1993 from the village of Pucuro, on the Panamanian-Colombian border. FARC struck again on January 16, 1994, when it raided a New Tribes Mission school near Villavicencio, Colombia, abducting Steve Welsh and Timothy Van Dyke, who were bound in front of their families and taken off into the jungle. It was later determined that FARC had murdered all five men.

The Complaint alleges that from 1989 through at least 1997, Chiquita (through its controlled agent, Banadex) made numerous and substantial secret payments to FARC and provided it with weapons, ammunition and other supplies through Chiquita’s transportation contractors, knowing that FARC was a violent terrorist organization. According to the lawsuit, Chiquita made monthly cash payments to FARC ranging from $20,000 to $100,000.

In March 2007, Chiquita pled guilty to violating U.S. anti-terrorism laws by funding another Colombian terrorist organization, Autodefensas Unidas de Colombia (United Self-Defense of Colombia, or the AUC). (Both FARC and the AUC have been officially designated as Foreign Terrorist Organizations (FTOs) by the U.S. State Department.) In its Factual Proffer to the Court in conjunction with Chiquita’s plea agreement, the U.S. Justice Department stated that it could prove that Chiquita made similar payments to FARC from 1989 through 1997. Chiquita ultimately paid a $25 million fine to the U.S. government as part of its guilty plea.

Plaintiffs adequately allege that Chiquita, knowing that FARC was a terrorist organization, intentionally agreed to provide money … to it as part of a common scheme … and that Plaintiffs were injured by overt acts done in furtherance of the common scheme.

In 2013, Chiquita asked the Court to reconsider the aforementioned 2010 decision, arguing that intervening law had established that Plaintiffs’ claims, predicated on primary and secondary theories of liability, were no longer viable. In a January 6, 2015 decision, Judge Marra declined to dismiss Plaintiffs’ claims, holding:

By enacting the ATA Congress criminalized providing material support to terrorists and provided a cause of action for any person injured by reason of an act of international terrorism. 18 U.S.C.A. §§ 2333, 2339A (West). If Plaintiffs in this case, who allege that Chiquita supplied a group that had been known to harm Americans and that was designated as a terrorist organization by the State Department with funds and weapons, cannot state a claim, it is absolutely unclear what fact pattern would ever satisfy the requirements. (Decision at 13-14.)

In this case, Plaintiffs allege that Chiquita continuously paid substantial sums of money to the FARC over a nine-year time span, knowing before and during that time of the FARC’s notoriety for extreme violence, its antagonism toward U.S. interests in Colombia, and its targeting of U.S. nationals for ransom kidnappings and murder, including two of the NTM missionaries involved in this case. These allegations support a reasonable inference that Chiquita knew the money it paid the FARC ‘would be used’ to ‘in preparation for’ or to ‘carry out’ terrorism related crimes, including ransom kidnappings and killings of U.S. nationals in Colombia, and thus are sufficient to support the legal conclusion that Chiquita violated one of the material support statutes, Section 2339A, by paying the FARC, and that this crime, in turn, qualifies as an ‘act of international terrorism’ within the meaning of Section 2333(1) for which Chiquita may be held primarily liable under Section 2333(a).

[T]he Court does not, as a matter of law, view the attacks on Plaintiffs’ decedents as highly extraordinary occurrences which are properly cut from the chain of proximate causation. From common experience, given the widely reported news relating to the decades-long civil war in Colombia, and emergence of notoriously violent guerilla groups in the context of that war, a reasonable juror could conclude that giving money to Colombian guerillas, having no function other than the perpetration of violence, would enhance the terror capabilities of the guerillas and lead to more violence. While other factors undoubtedly contributed to the strife, none of these causes can be said to be unforeseeable as a matter of law, as they could reasonably be expected to operate in conjunction with the alleged financing of terror.

Significantly, Judge Marra granted Plaintiffs’ motion for partial summary judgment, holding that Chiquita could not argue to a jury that its conduct was excused because it had acted under duress and its employees would have been killed if it had stopped making the illegal payments.

The case was scheduled to begin trial on February 5, 2018, but settled that day before jury selection. 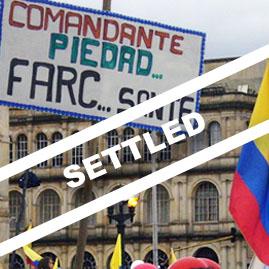